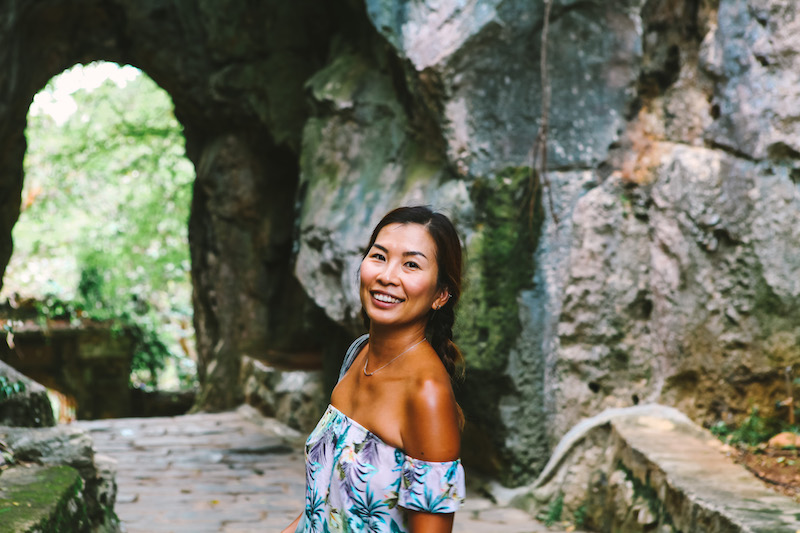 WHAT TO SEE IN THE MARBLE MOUNTAINS IN DA NANG, VIETNAM?

The Marble Mountains are a group of five limestone and marble mountains (or rather hills) in Da Nang. It is also a well-known place of pilgrimage with peaks, caves, tunnels and temples just waiting to be discovered.

Named after the 5 elements in Vietnamese: metal, wood, water, fire and earth (Ngũ hành), the Marble Mountains are located in a coastal area famous for stone cutting and carving about 9 km south of Da Nang.

The Marble Mountains are one of the best things to see in Da Nang.

Here is a full guide to explain all you need to know about your visit.

The caves in the mountains contain many secrets, including bullet marks from evidence of combat between American troops and the communists sheltered in the caves. There are also Buddhist shrines and places of worship scattered across the mountains; it is a much visited spiritual site.

According to a local legend, a dragon emerged from the sea on Non Nuoc beach and laid an egg. A thousand days and a thousand nights after the egg hatched a beautiful girl. The egg fragments were left on the beach and eventually turned into five mystical marble mountains.

IMPRESSIONS OF THE MARBLE MOUNTAINS IN DA NANG:

History of the Marble Mountains in Da Nang

The cluster of limestone that make up the Marble Mountains were originally sacred sites revered by the Cham peoples of central and southern Vietnam. However, the mountains are not as massive as some of the ranges in northern Vietnam. But they are impressive compared to the plains of the surrounding countryside.

It is therefore easy to understand why they attracted the Cham people. They also contain a myriad networks of caves and tunnels that the Cham have recognized as holy places.

In the centuries following the Champa Empire, Buddhist followers built shrines and temples on top of the mountains and in the caves below. Therefore, the Marble Mountains and their shrines continue to attract visitors to this day.

In 1825, centuries after the decline of the Cham Empire, Vietnamese King Minh Mang named the mountains “Ngu Hanh Son” – the mountains of the five elements.

Each mountain is named after one of the five essential elements of Eastern philosophical thought: Kim (metal), Tho (earth), Moc (wood), Hoa (fire), and Thuy (water). Together, the mountains were a spiritual destination for both Vietnamese aristocracy and Mahayana Buddhists.

However, during the French colonial period, French geologists realized that the mountains were made of marble and renamed them the “Marble Mountains”. The name stuck afterwards.

The Marble Mountains during the war

Above all, through a history that has been both peaceful and turbulent, this sacred site has served as a refuge for generations of Vietnamese. During the French Colonial War, Huyen Khong Cave served as a secret command post for local revolutionaries and a forward base from which they could stage guerrilla assaults.

In 1968, American forces were attacked and driven from the Marble Mountains by the People’s Liberation Armed Forces (PLAF, or Viet Cong). Simultaneous assaults on the mountains and nearby US Air Force bases succeeded in returning the caves to communist control.

The PLAF then established a secret field hospital in Huyen Khong cave. So while walking inside the cave, imagine the harsh conditions that Huyen Khong Cave offered as a surgical unit.

Useful and important information for your visit of the Marble Mountains

We recommend taking the elevator on your way up and take the stairs on the other side of the mountain on your way down.

HOW TO GET THERE

The Marble Mountains are a popular attraction in the region and it is not difficult to get there:

By local bus (yellow), count 20,000 vnd from Hoi An. The journey takes about 20min. All you have to do is take bus number 1 which connects Hoi An – Danang.

By scooter if you rent one.

You can also join a guided tour which include a stop at the Marble Mountains. More information here.

BEST TIME OF THE DAY TO VISIT

We recommend to visit the Marble Mountains first thing in the morning (to avoid the heat) or late afternoon around 4pm. Prepare to sweat though, as there are lots of stairs up and down… Bring plenty of water with you. There is also a small shops on the top selling cold drinks.

DURATION OF THE VISIT

Count at least 1.5 hours to visit the Marble Mountains. Of course you can easily spend more time there as there are so much to see!

BEST THINGS TO SEE AT THE MARBLE MOUNTAINS?

The Thuy Son Marble Mountain, is the largest of the 5 (15ha in area and 105m high) and above all the most interesting since it has several caves as well as pagodas, some of which date from the 17th century. This is the mountain which you want to visit!

Why surreal? Because the cave is the Buddhist representation of hell and purgatory. The cave therefore has 2 sets of stairs – one to heaven, and the other to hell.

This gives improbable statues for the part that represents hell.

Located on top the mountain, this is the first cave you will visit after taking the lift to the top of the mountain. It has a small temple in the middle. You can admire a Buddha statue behind it.

Van Thong Cave. Small cave but with a vertical underground gallery which makes its attraction, located behind the statue. The bravest and daredevils will try to climb and reach the top.

This gives rise to a magnificent view at the top. You can go down on the other side by making your way between the different stones.

This huge cave is the best known and especially the most interesting with Am Phu Cave. The entrance to this place is guarded by two statues of administrative mandarins (to the left of the door) and two military mandarins (to the right).

It has a unique and captivating atmosphere thanks to an opening at its top that lets in rays of light. Inside, there are several altars and a small temple. You can also see a large statue of Buddha on the rock. If you read the beginning of the article, you know that it has a historical side.

This is one of the best things to see in the Marble Mountains.

The 30m high Xa Loi tower, comprising 7 floors. Inside the tower, there are nearly 200 Buddhas.

This the most beautiful pagoda in the Marble Mountains. You will see it right away after taking the elevator up the mountain. You can also see this pagoda from the road driving from Da Nang to Hoi An.

Tam Thai pagoda was built in 1630 and rebuilt in 1825. The frescoes of this pagoda represent the story of Buddha.

Also not to be missed, the Highest Peak which is the highest point of the mountain and a breathtaking view of Danang. It takes about 250 to 300 steps to get to the top.

Other things to visit in Da Nang near the Marble Mountains

START YOUR VISIT WITH LADY BUDDHA

From the beach in Da Nang, if you look on your left, you will quickly see a huge white statue sticking out from the mountain. This is Lady Buddha.

It’s a bit like Danang’s lighthouse. Lady Buddha is a large statue, the largest Buddha in Vietnam, 67m, overlooking the beach. Next to the statue you can visit the huge Linh Ung pagoda. The different Buddha statues in the pagoda, although smaller, are also magnificent.

For us, Hoi An is the prettiest town in Vietnam. Even according to Tripadvisor, Hoi An is in the list of top 25 most favorite travel destinations in the world! We understand why!

Located on the UNESCO heritage route, Hoi An is an old town which has been particularly well preserved. It is a unique place in Vietnam and has been recognized as a UNESCO World Heritage Site since 1999.

READ: 16 BEST THINGS TO SEE IN HOI AN

CHECK OUT THE DRAGON BRIDGE IN DA NANG

With a length of 666m, the Dragon Bridge is the symbol of the city of Da Nang. It is especially beautiful at night with great illuminations.

Check it out on the weekend at 9pm as fire comes out of the head of the Dragon at each end of the bridge combined with water performance! A great show in Da Nang and it’s free.

You can also simply take a walk along the bridge at night and admire the view of the city of Da Nang.

MORE PHOTOS OF THE GORGEOUS MARBLE MOUNTAINS IN DA NANG

16 AWESOME THINGS TO SEE IN HOI AN, VIETNAM: here