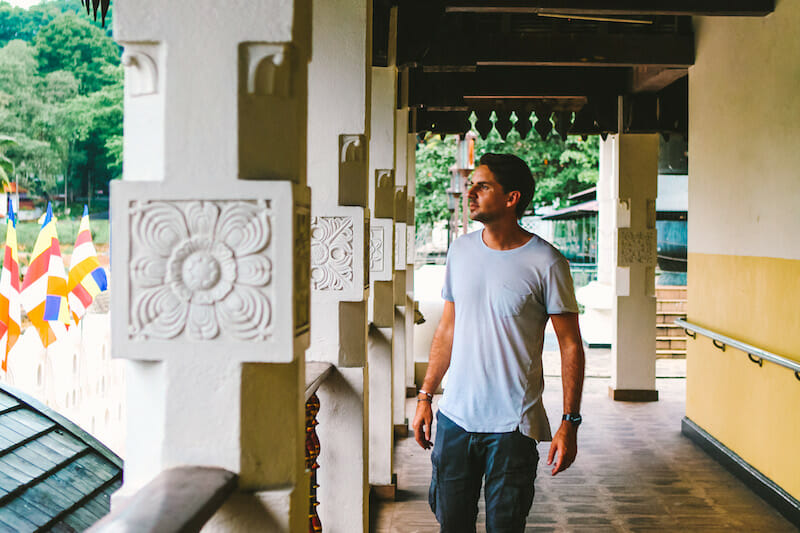 The Temple of the Sacred Tooth Relic is one of the best things to see in Kandy, Sri Lanka. Called Sri Dalada Maligawa in Sinhalese, this incredible temple is right in the heart of the city of Kandy. This former capital of Sri Lanka is listed as a UNESCO World Heritage Site.

The temple is the most visited places in Kandy, the spiritual capital of Sri Lanka. We wrote a full post with the 10 best things to see in Kandy here.

The Temple of the Sacred Buddha’s Tooth is a must visit in Kandy. Why such a name? Simply because this temple houses a relic of a tooth of Buddha. Impressive right?

This relic makes this temple one of the most sacred places for Buddhism in Sri Lanka. Every Buddhists in Sri Lanka try to make a pilgrimage there at least once in their life.

In this post de detailed all you need to know for your visit of this intriguing temple in the center of Kandy.

BRIEF HISTORY OF THE TEMPLE OF THE SACRED TOOTH RELIC

According to the legend, Buddha’s tooth was found in his ashes after his cremation and kept in Kalinga in India.

In 313 AD, Princess Hemamali and her husband stole the tooth relic of Buddha and hid it in the princess’s hair and smuggled Buddha’s tooth to Sri Lanka.They then handed it over to the King Kirthi Sri Meghavarna. The King preciously locked Buddha’s tooth in Anuradhapura.

Over the centuries, the Buddha’s tooth often changed location. When Kandy was declared the capital of Sri Lanka, the tooth was transferred there. But during the invasion of the Portuguese the tooth was again moved in order to be hidden and preserved.

The Temple of the Sacred Tooth Relic was built during the reign of the Kandyan kings, each adding his part to the building between 1687 and 1707.

During the colonial wars against the Portuguese and the Dutch, the original temple was badly damaged but very quickly rebuilt.

Finally during the civil war, the Tamils ​​drove a truck with a bomb inside the temple which made huge damage. The truck contained more than 300 kilos of explosives, the attack caused 16 deaths and more than 25 injuries.

The Temple of the Sacred Tooth Relic was then fully restored to the current stage as of today.

Since that event, the temple is now highly secured with huge fences all around the area.

WHY IS THE TEMPLE CALLED “SACRED TOOTH RELIC”

Quite simply because it contains a relic of the tooth of Buddha. The tooth is preciously locked up in 6 boxes, themselves locked in a room and carefully guarded by the monks and numerous guards.

It is absolutely impossible to see it, but the excitement of being near the tooth is still present!

The box that contains Buddha’s tooth would only open every 5 years.

As you will have understood, this Temple has a particular importance among Buddhism. For them, it is essential to go at least once in their life to the Temple of the Sacred Tooth Relic.

WHAT TO EXPECT DURING YOUR VISIT OF THE TEMPLE

To visit the temple count at lest 1 to 2 hours. There are many different parts of the temple to be visited as well as the outdoor areas.

It is possible to visit the Temple of the Sacred Tooth but unfortunately it is not possible to see the relic… The box is only opened once every 5 years and only leaves the temple a few times a year! The temple is located in the heart of the Old Royal Palace of Kandy.

The doors of the room housing the relic (located on the first floor) are open so that the faithful can see it (see the relic, but not the tooth itself which remains sheltered in six thick boxes). During the ceremonies monks collect the offerings carried by the impressive crowd that marches through the Temple.

Many tourists choose to also buy offerings to participate. There are many merchants selling the offerings, as flower arrangements outside the temple.

It is also highly recommended to take a guide with you during the visit of the temple. You will understand the history of the Temple much better, and the importance of the Tooth for buddhists. You can book the guided tour here.

HOW TO GET TO THE TEMPLE?

As the temple is centrally located by the main lake in Kandy, it is easily accessible on foot. As we stayed in The Radh Hotel, which we highly recommend by the way (check it out here), we just walked a few minutes to get to the main entrance of the temple.

If you are staying a bit further, simply ask a Tuk-Tuk to get you there.

You can also join a private city guided tour, which we highly recommend especially to visit the Temple of the Sacred Tooth Relic! You can book it here.

WHAT ELSE TO SEE INSIDE THE TEMPLE?

Beyond the main temple, there are other buildings belonging to the former royal complex. There is in particular the old carved wooden audience hall, or a small room for Raja the most famous elephant in Sri Lanka! Raja is so famous that it was declared a national treasure and that one day of mourning was observed in the country at his death! He carried the holy relic of the tooth of the Buddha around the city during the Esala Perahera for more than 50 years…

After you finish with your visit of the Temple of the Tooth Relic, head to the World Museum of Buddhism. The Museum is located right behind the Sacred Tooth Relic Temple.

This rather large museum shows photographs depicting Buddhist worship around the world, along with replicas of famous statues.

There are several sections and galleries dedicated to various countries associated with Buddhism. Overall, the museum is a good place to spend some time and to get to know about history of Buddhism

Admission fee: Free (as long as you pay the entrance for the Temple of the Tooth Relic)

After finishing our visit of the temple, we were asked by locals if we wanted to join a traditional dance performance. We had no idea about is, but decided to follow them.

The place is actually just a few minutes walk from the Temple of the Tooth Relic in a large performance hall. We paid a very small entrance fee and enjoyed the 1 hour show.

This was totally unexpected, and we absolutely loved it!

The show was filled with drum beats, dance, fire breathing performance and lastly walking on the burning coal. This made us literally hold our breath. Definitely check it out when in Kandy!

We are not quite sure about the schedule of the show. The best would be to ask your hotel or at the entrance of the temple, as they may have more information. We only know the location of the theatre: here

You can also join a full guided tour in a private car which includes the visit of the temple, the Royal Botanical Garden.

READ: A FULL GUIDE FOR YOUR VISIT OF KANDY ROYAL BOTANICAL GARDEN

WHERE TO STAY IN KANDY?

Located in the center of Kandy, this hotel is the perfect place to start your exploration of the city. Many attractions such as the Temple of the Tooth Relic, or Kandy Market are accessible on foot! The rooms are modern and clean. The breakfast is also delicious with a great variety of food. Check out the availability here.

The Grand Kandyan, is a 5-star hotel, tucked away in Kandy just a few minutes drive to the Temple of Tooth Relic. The hotels has a beautiful swimming pool, a fitness center and a spa. If you want to get pampered while visiting Kandy, then this is the best hotel in the area. Book now.

All rooms are designed to offer flexible, modern yet homely living spaces. You can also dine at the Radisson Hotel Kandy’s signature all-day dining restaurant serving buffet breakfast. A delectable range of Asian and International cuisine prepared using only fresh and hand-picked produce is available for lunch and dinner. Bommu Rooftop Bar offers a panoramic view of the town of Kandy along with cocktails and finger foods.

Check it out here.

HOW TO GET TO KANDY?

Here are the distances and train/bus routes for some cities you might want to visit before or after your trip to Kandy:

Distance Colombo – Kandy: 120 km. It is easy to take the Colombo Kandy train (or vice versa). There are several a day and it takes about 2h30 (sometimes more depending on the trains).

Distance Kandy – Ella: 75km. The train journey from Kandy to Ella is one of the most beautiful in Sri Lanka, and arguably in the world! It lasts 6hours but there is so much to see that time flies.

READ: KANDY-ELLA TRAIN: THE MOST EPIC RIDE IN THE WORLD

10 AWESOME THINGS TO DO IN KANDY: here

BEST THINGS TO SEE IN THE SOUTH OF SRI LANKA: here

14 AWESOME THINGS TO DO IN MIRISSA: here