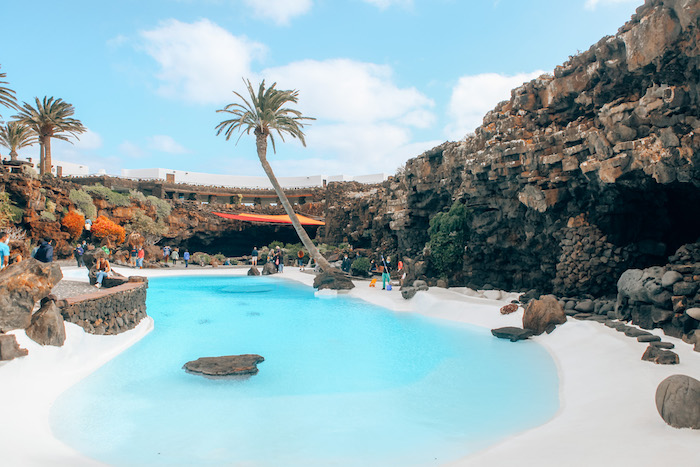 Jameos Del Agua is our favorite place to visit in Lanzarote. It is also our favorite work from the genius César Manrique (more about him in this post).

The Jameos del Agua are located inside the volcanic tunnel created by the eruption of the La Corona volcano in Lanzarote. They owe their name to the existence of an inland lake which constitutes a unique geological formation. It comes from filtration through rock that sets below sea level.

Jameos del Agua is one of the main attractions in Lanzarote (here are the 25 best things to see on the island). We absolutely loved our visit to this place.

In this post we explain all you need to know about the Jameos del Agua. Enjoy the visit!

The tunnel inside Jameos del Agua is formed by the eruption of La Corona volcano. It is one of the longest tunnel in the world with 6 km in length. The partial collapse of the roof of the tunnel forms a structure known as “Jameo”, which is an opening in the ground that gives access to the various caves.

More than six kilometers have been explored; which go from the crater of the volcano to the sea. A tunnel that is also called “Túnel de la Atlántida” (Tunnel of Atlantis).

The tunnel is formed by three “jameos”: the “Jameo Chico”, which gives access to the interior, the “Jameo Grande”, and a third, known as the “Jameo Redondo”. Due to the uniqueness, environmental protection measures have been implemented for the Jameos del Agua in Lanzarote.

They are located in the Natural Monument of Malpaís de la Corona and and have been declared a Site of Scientific Interest. The site has also been declared a site of cultural interest on the island of Lanzarote.

It is in this playground that César Manrique designed one of this masterpiece.

A MASTERPIECE IMAGINED BY CÉSAR MANRIQUE

Jameos del Agua is the Center of Art, Culture and Tourism created by César Manrique. It reflects his creative work: the harmony between nature and artistic creation.

The Jameos del Agua are attributable to César Manrique. However, the complexity of the project and the repeated stays of César Manrique in New York during the first years of the creation of the Center were such that, he delegated a part to one of his closest associates: the artist Jesús Soto.

At the beginning of the sixties, and due to the abandonment of the surrounding area, it was necessary to carry out works to clean and reassemble the Jameos. Although the work took a long time, 1966 is the date when the first phases were opened to the public.

It was only in 1977, after more than a decade of work, that the general structure of Jameos del Agua was ready. In the same year, the Center (including the Auditorium) was officially opened and the work considered complete.

OVERVIEW OF THE JAMEOS DEL AGUA

Outside Jameos del Agua you will find a small reception area surrounded by stone walls, white partitions and the remains of a boat. After crossing a small entrance, you will descend an ingenious spiral staircase made of volcanic rock and wood, which will allow you to discover, little by little, the first interior of “Jameo Chico”.

In this space you will notice the abundant vegetation and decorative elements that fill the structure.

The “Jameo Chico” is part of the first phase of the renovation of the Jameos del Agua. The main objective of the project was to intervene in the renovation and to take advantage of these spaces which were the most emblematic of the geography of the island. Los Jameos del Agua was originally designed to be a concert hall: you can see the bar, the doors and the marble dance floor which date from this period. Today, you can enjoy a meal or a drink at this place.

In the enclave, you will discover a natural lake of extraordinarily clear water. This part retains its barrel-shaped vault characteristic of volcanic tunnels. Its cathedral-like character is reinforced by the presence of an opening in the upper part of the vault from which, on sunny days, a shaft of light shines and plunges into the depths of the lake. See one of the first picture in this blog above.

The lake is home to more than a dozen endemic species that are of great scientific interest. This includes the famous blind albino crabs that dot the rocky floor of the lake and are called “ jameitos”. The darkness in the cave causes the lack of pigmentation. This rare whitish specimen (unique in the world) is barely 1cm long and is a symbol of Jameos del Agua.

Blending into the surrounding landscape, you will come to a walkway that allows visitors to cross the lake sideways and arrive at the “Jameo Grande”.

The ingenious handling of this area stands out from the rest of the side. Indeed, you will find yourself in front of an exuberant exotic garden where a surprising vegetation of flowers, palm trees, cacti and fig trees surround a white and dreamy swimming pool. The intense blue water just want to make you jump in it. However it is of course not allowed (unfortunately). Curved walls top it all off.

The strident white of the swimming pool contrasts with the black of the rough stone, transforming the place into a true oasis. There’s a stunning century-old palm tree looming over the pool.

If you continue past the “Jameo Grande”, you will come to another unique creation of Manrique: a spectacular auditorium that makes wonderful use of the interior of a volcanic cave. The room gives an architectural epilogue to the visit. Simply Spectacular. We would love to attend a concert in this magical place!

If you do not have a car while in Lanzarote, it is very easy to book a tour group which combines some of the best sights in Lanzarote. We recommend this tour.

OTHER THINGS TO SEE NEAR JAMEOS DEL AGUA

Teguise, the old capital of Lanzarote

Not far from the Cactus Garden, if you have a rental car, you can easily visit Teguise the old capital of Lanzarote.

Teguise in Lanzarote is considered the oldest town in the Canary Islands, dating back to the 13th century. The Villa of Teguise, as some still call it, was the capital of Lanzarote for over 450 years, until 1852 when Arrecife became the new capital.

Visiting Teguise is a must if you are in Lanzarote. To help you with your visit, we listed the best things to see in Teguise here.

Located in the northeast of Lanzarote, Arrieta clearly stands out from the other seaside resorts in the south of the island. Nestled in a fishing village with many small restaurants, you can enjoy fresh fish with a view of the beach. The calm and authenticity of Arrieta will charm you.

The cactus garden in Lanzarote (also called Jardín de Cactus) was César Manrique‘s last work in Lanzarote. It is located near the village of Guatiza on the road to Mala (Community of Teguise) and is very easy to identify by an 8 meter high cactus sculpture made by Manrique and located just in front of the park.

The cactus garden with a size of about 5000 square meters has 10,000 cacti from more than 1000 different species from America, Madagascar and the Canary Islands. They were brought to the island of Lanzarote by botanical expert Estanislao Gonzalez Ferrer.

An absolute must-see in Lanzarote.

We wrote a full post about the Cactus Garden here if you wish to know more about it.

PLAYA BLANCA, the best place to stay in Lanzarote: here

PAPAGAYO BEACH, the most beautiful beach in Lanzarote: here

CÉSAR MANRIQUE: his heritage in the Canary Islands: here

TOP 10 REASONS why you should visit Lanzarote: here