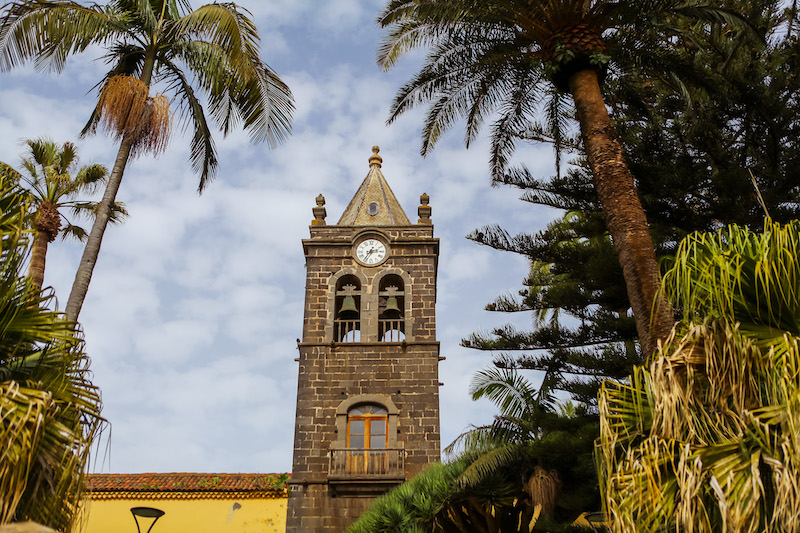 San Cristóbal de La Laguna, also called “La Laguna” is one of the most beautiful towns in Tenerife. In fact, it is the ancient capital of Tenerife.

La Laguna with its colonial heritage was declared Cultural Asset and World Heritage Site by UNESCO in 1999 for having preserved intact its original layout dating from the 15th century. This layout even served as a model for colonial cities in America.

A visit to La Laguna is a must if you are in Tenerife. Its architectural beauty, its lively streets, and all the history of La Laguna, makes it one of the best towns to visit on the island.

As the former capital of Tenerife, La Laguna was an important political, economical and cultural power in the Canary Islands. Today it is one of the most visited towns in Tenerife, and for good reasons!

We will detail everything you need to know about La Laguna in this post. Enjoy your trip!

Other things to see in the area are Cruz de Taborno at 1020 meters the highest point of the municipality, on the coast the agricultural lands of Tejina and Valle de Guerra, as well as Bajamar and Punta de Hidalgo, with their natural pools.

Other places to visit outside La Laguna are the villages of Tegueste, Anaga Rural Park, El Batán and Las Carboneras.

In the town of San Cristóbal de La Laguna, there are lots to see. You can easily spend a full day to cover it all. Museums, historical houses, palaces, churches and many beautiful streets are to be discovered in the city.

Among the main squares of the city, one of the most popular is the Plaza del Adelantado with a cobbled square, a beautiful central marble fountain and the magnificent buildings that surround it.

The Plaza de la Concepción is the other important square in the city, adjoining the emblematic Church of La Concepción; it is very lively, with beautiful pedestrian streets.

So here is the list of all the things to see and do in San Cristóbal de La Laguna:

WHAT TO SEE IN LA LAGUNA IN TENERIFE?

You will find a magnificent architectural heritage in La Laguna, houses and mansions in the Old Town. These are imposing buildings built around patios with large sculpted facades.

Let’s start with the Town Hall of San Cristóbal de La Laguna. It is a beautiful building built in 1511 to house the Cabildo or island government. In 1822 its facade was restored in Tegueste stone.

The Teatro Leal de La Laguna is one of the most beautiful buildings in the city. This World Heritage Site, built in an eclectic style, with a white facade decorated with floral and animal elements, was designed by López Ruiz and Manuel Verdugo.

The Leal Theater is a cultural space in the town where music and theater performances take place. It is located in Calle de la Carrera, one of the main commercial and lively areas of La Laguna.

WAIT! you may skip this part by reading “tourist office” as a header of the best things to see in Tenerife. However, the office is located in a beautiful historical building with an interior patio where you take nice photos.

In one part of this gorgeous house, you will find multiple guides which will explain you what to see in the town and give you a very informative map with the main point of interests in La Laguna. So, yes, we highly recommend that you go there…

They also offer free guided tour, which we highly recommend, as you can then enter many of the historical places and understand about the history of La Laguna. Here are more information on the free tours.

The city of La Laguna has many beautiful religious buildings such as large convents, churches, hermitages, chapels.

The Church of Nuestra Señora de la Concepción is the oldest of the churches in La Laguna, declared an Asset of Cultural Interest in 1947. Its main architectural element is its tower, a mixture of different styles due to the many renovations it underwent in the 17th century.

The Church of Nuestra Señora de la Concepción is located at the end of Calle La Carrera. If you want, you can even walk the stairs all the way to the top of the bell tower for an amazing view of La Laguna and all the surrounding mountains.

Dedicated to the patron saint of Tenerife, the Virgen de los Remedios, La Laguna Cathedral is undoubtedly one of the symbols of the city.

The realization of its facade is inspired by the cathedral of Pamplona. Built in a neoclassical style, the interior has had many problems since construction began. Closed to worship for nearly 12 years due to construction work, it reopened in January 2014, making it a must-see when visiting San Cristóbal de La Laguna.

The visit of the museum allows you to discover the interior of a stunning Canarian house.

The museum traces the history of the colonization of the island of Tenerife by the Spaniards, then presents the economic and social development of the island. It is a good introduction to the discovery of the island.

This is one of the best things to see in La Laguna.

The Plaza del Adelantado is named in honor of Alonso Fernández de Lugo (1456 – 1525), conqueror of the island of Tenerife. Adelantado is a title granted by the Crown of Castile to all people appreciated for their military qualities.

Alonso Fernández de Lugo also took part in the conquest of the islands of Gran Canaria and La Palma, of which he was supposed to become governor. His death is shrouded in mystery, as it is believed he was poisoned by his sons in order to inherit the title of Adelantado. As one can guess, the conquest of the Canary Islands did not happen without betrayal.

Around the Plaza del Adelantado, there are many significant buildings in the history of La Laguna. We therefore recommend that you take advantage of the view from the square to see the old house where Father Anchieta was born (founder of the city of São Paulo in Brazil), the small chapel of San Miguel which is the oldest in the city dedicated to the Archangel Saint Michael, head of the armies.

La Laguna was considered the intellectual capital of the Canary Islands. Thus, the street of Nava y Grimón was the place where intellectuals and great thinkers of the 17th century met to discuss politics, culture and religion.

From the street you can observe many historical buildings. Some of them have been transformed into beautiful hotels.

This house belonged to the Salazar family, a very wealthy family who owned a fleet of ships sailing to America. Inside, there is a central courtyard adorned with orange trees.

10. Square of the Supreme Council of the Canaries

Make a final stop at the square of the Supreme Council of the Canaries. This place is absolutely gorgeous surrounded by palm trees and many historical buildings.

From there continue your walk through the street of Saint Augustin where you can further appreciate the beauty of La Laguna in Tenerife.

How to get to San Cristóbal de La Laguna in Tenerife?

Getting to San Cristóbal de La Laguna by car

The best way to explore Tenerife is by car. It is easy to drive on the island (except perhaps to Masca – more info here). From the airport a few minutes drive will get you to the ancient capital.

However be aware that parking can sometimes be a bit of an issue as the town is very popular with tourists. However, after waiting for a few minutes in one of the main parking (here), we got a spot, yay!

Finally, you can also take the bus in Tenerife, pretty much anywhere. Simply check TITSA website.

Where to stay in La Laguna

Other things to see near La Laguna

The villages of Bajamar and Punta Hidalgo are located in the northern coast of the municipality of La Laguna which offer a beautiful landscape and great outdoor activities next to the sea. Beaches, swimming pools, promenades by the sea, hikes in the Natural Park of Anaga, and restaurants where you can taste the gastronomy of Tenerife.

Besides, you can also discover the beaches of Troche, San Juan or El Arenal. The pools of Bajamar or El Arenisco are more ideal for swimming as the sea can be quite rough in this part of the island.

Located in the northeast of the island of Tenerife, the Anaga Rural Park has been declared a Natural Park for amazing landscape. It is one of the areas of greatest geological value in Tenerife and of great biodiversity.

In conclusion about La Laguna

Visiting San Cristóbal de La Laguna is an absolute must if you travel to Tenerife island. This is where we felt the true soul of the Canary Islands with all its history.

We spent almost a full day exploring the city where we had a really good time.

We can’t recommend enough a visit of this place in Tenerife.

If you have any question about Tenerife or San Cristóbal de La Laguna, feel free to leave a comment below.