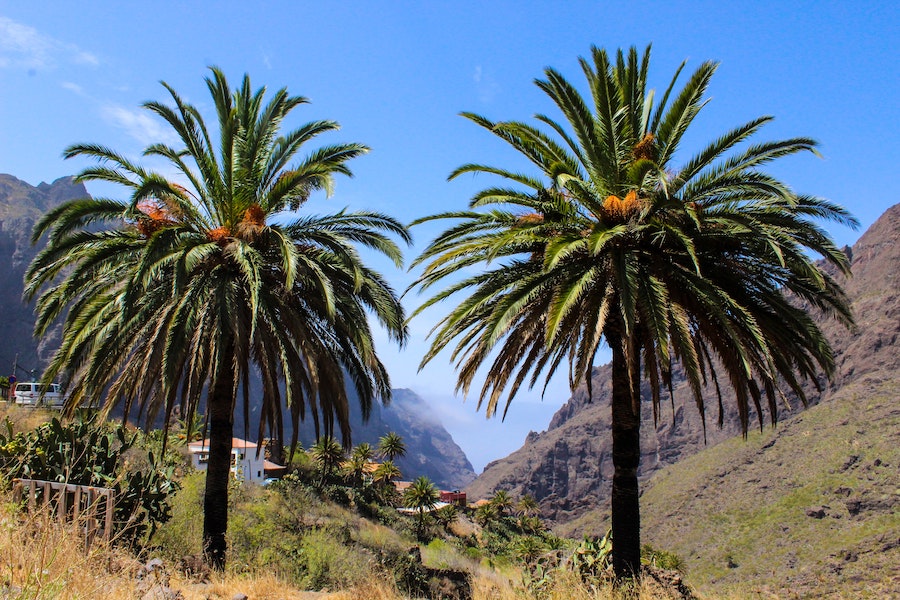 When is the best time to visit Tenerife in the Canary Islands? You are thinking about your next holiday and wonder if Tenerife would be a good choice? We will answer all your questions here.

To make it short, Tenerife can be visited all year round. Like everywhere in the Canary Islands, Tenerife is famous for the eternal spring climate. There is no low seasons in Tenerife. However, if you want to swim or maximize your chances of sunny days, there could be slightly better months than others.

We detailed everything you need to know about the climate in Tenerife in this post.

If you don’t have time to read the entire post, here is a quick summary for the best time to visit Tenerife:

In Tenerife the climate is favorable all year round

On average, the hottest months are June, July, August, September, October and November

The best months for swimming is June, July, August, September, October and November

The north is the wettest part of the island, with light rains from time to time. The vegetation is therefore more abundant, which creates splendid landscapes.

In the south, the air is very dry, because it receives only very rare rain. It is also in this region that there are the most hours of sunshine per year, which is why it is the southern part of the island that has been chosen for tourist development!

In its center, the Teide mountain range forms a natural border and cuts Tenerife in two on a northeast/southwest axis. Rising to more than 2,000 m. altitude, the days are often sunny, but windy, and the nights cool, even cold. In winter, it is not uncommon for snow to cover the peaks.

As in the rest of the Canary archipelago, the island of Tenerife enjoys mild and very pleasant summers. Far from being as hot as in its neighbor, Morocco, the heat is moderate, with temperatures varying between 21 and 29°C.

During this period of the year, the rain is almost non-existent. It is therefore the ideal time to enjoy the joy of a seaside trip. In return for these perfect conditions, the island experiences a significant influx of tourists, but you can always find a little piece of tranquil paradise, especially in the north.

Summer is one of the best time to visit Tenerife.

Tenerife’s climate in winter is very mild. With temperatures varying between 15°C in the morning and 20°C in the afternoon. However, this is the rainiest period, even if the precipitation remains relatively low. Unlike cities like Santa Cruz, the west coast is the wettest, especially towards La Orotava mountain.

If you are brave enough, you can still swim during winter. You may even swim while contemplating the snow-capped Mount Teide!

In winter bring something warm in your suitcase such as waterproof jacket in case of a few possible showers and sweater for cool evenings. However, also bring your summer clothes and swimwear, it will also be hot enough during the day.

SPRING AND AUTUMN IN TENERIFE

Spring and autumn are mild seasons in Tenerife, just like in neighboring Canary Islands: Lanzarote or Gran Canaria. The rain is less present than in winter and the temperatures are warmer during the day. These are the ideal seasons for superb hikes.

During spring and autumn you see less tourists in Tenerife. So you can enjoy the beauty of Tenerife even more! Spring and Autumn is the best time to visit Tenerife.

READ: 25 BEST THINGS TO SEE AND DO IN TENERIFE

WHAT IS THE WATER TEMPERATURE IN TENERIFE?

In Tenerife like in the rest of the Canary Islands, the water temperature is never too warm. On average, it varies between 18°C in the winter months and 23°C in September, the hottest month. There is therefore relatively little temperature difference during the year, so if you are brave enough, you can even swim for Christmas!

ARE THERE ANY FESTIVALS OR EVENTS IN TENERIFE THROUGHOUT THE YEAR?

Here are some main events in Tenerife:

February-March, Santa Cruz de Tenerife carnival. It is as famous and lively as the carnival of Rio in Brazil. More info here.

August 15, Feast of the Virgen de la Candeleria A gigantic procession takes the direction of the Basilica of La Candeleira, located in the municipality of Candeleria on the island of Tenerife.

November, the Fiesta de San Andrés (The Feast of Saint Andrew) On the night of November 29 to 30, the faithful make a nocturnal procession. The next day there are many activities including the traditional “correr las tablas” (plank race) which consists of descending the slopes of a hill on greased planks in Icod de los Vinos.

WHAT TO PACK TO VISIT TENERIFE?

In winter, light clothes for the day, as well as a fleece or a very warm sweater for the evening. Even if the rain is rare, it may be wise to take a waterproof jacket, which will always be useful as well as a windbreaker.

During summer, light clothes, t-shirt and long trousers for the evening.

In any season, choose good hiking shoes, without forgetting your swimsuit!