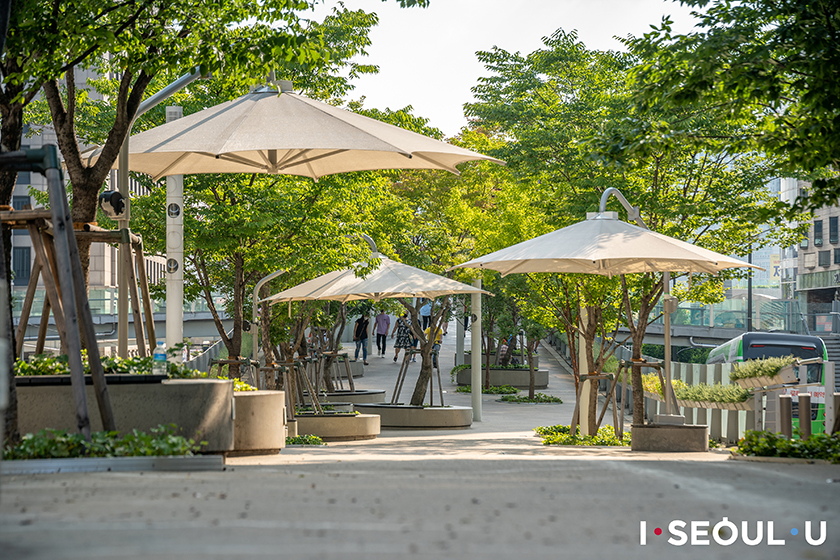 In May 2017, Seoul introduced its city promenade, Seoullo 7017, located in the heart of the city.

After decades of urban planning giving priorities to road development, Seoul has changed its strategy to finally increase the number of urban renewal projects. In a context of deteriorating air quality and congestion, Seoul embarked on flagship projects to redevelop public spaces. These changes are accompanied by support for public transport and innovative mobility. Well done, Seoul !

For more ideas about things to do in Seoul, check out this post. If you are looking for other parks in the city, check out the list of best parks in Seoul here.

Seoullo 7017 is an architectural project of MVRDV agency, which was inaugurated on May 20, 2017. It is an old elevated highway, built in the 1970s to support the government’s road development strategy around the new Seoul Train Station.

Due to security reasons, the old highway was supposed to be demolished in 2006. However the government city hall preferred to transform it into a public garden, like the New York High Line. Great idea!

This is not the first time that an expressway has turned into a green space in the South Korean capital. Cheonggyecheon, the stream that runs through the city center from east to west, is the symbol of a successful conversion, for the benefit of the population and for environmental issues. You can also check out old train line reconverted into beautiful parks such as the Gyeongui Line Forest Park in Hongdae or the 6km long Gyeongchun Line Forest Park.

Seoullo 7017 stretches for over a kilometer. When you take the stairs that lead to this road, you find yourself 17 meters high, in the middle of 50 families of plants, which have been chosen according to their meaning and their blooming period. Cherry trees in spring, fruit trees in summer, maple trees in autumn, conifers in winter: this is all of South Korea’s natural heritage.

Thousands of trees and flowers decorate the course and 18 stations have been set up to offer shows, entertainment and services ranging from puppet theater to floral courses, including art galleries, a tiny swimming pool to dip your feet in the summer, coffee shops and much more.

The night view of the historic building of the Old Seoul Station (now a space for artistic and cultural exchanges) is fabulous. Seoul Square, which faces it, is a multi-concept building, between office and service building. It is completely covered with a digital screen made up of 42,000 LED screens, which lights up from sunset until 11 p.m.At night, Seoullo 7017 is lit by blue lights.

Seoullo Park 7017 allows you to admire here and there some 50 species of flowers and 228 different species of trees (listed in alphabetical order), forming a sort of giant outdoor botanical garden. We recommend in particular the Place des Roses with its romantic atmosphere.

A few unique trees have been planted towards Namdaemun Market. While reading the different plaques, visitors can discover trees named after different groups known to Kpop such as Junho from 2PM, Suho from EXO, Sana from Twice and many more. These trees were donated with the help of fan clubs from the various groups mentioned.

“Seoullo” means in Korean “The road to Seoul”

The name of the promenade includes 2 “7”, one for 1970, year of construction of the highway and the other to mark the inauguration of the latter in promenade, 2017. But, we also find the number “7” in the 17 meters height of this elevated highway, in the 17 accesses to this path. This space is meant to be friendly, green and lively and everything has been put in place to make it so.

Seoullo is now nicknamed the “Park in the air”.

HOW LONG IT TAKES TO VISIT SEOULLO 7017?

A visit to Seoullo 7017 can be completed in less than 30 minutes walk. However, as Seoullo is conveniently located in the heart of Seoul, it is possible to enjoy well-known sites such as Namdaemun Market, Seoul Station, Namsan Tower, Sungnyemun Gate, and Seoul Square.

To enjoy the best view of surrounding sites , we recommend that you go through the various observatories, which will give you a great point of view of the city.

The best place to take some photos in Seoullo is Seoul Station Square which offers a clear view of the old station.

Since Seoullo is conveniently located there are many buses going there, just stop at Seoul Station. If you want to take the subway, take line 1 or 4. The airport express line also stops in Seoul Station. From Seoul Station you can easily walk to Seoullo 7017

THE IMPACT OF SEOULLO 7017 FOR SEOUL AND KOREA

Seoullo 7017 is more than just a garden. It marks the change of strategy from the government: from promoting cars and roads a few years ago, the government is now focusing on sustainability, smart city and public transports. Seoullo is like a symbol of this change, as the government started with a project at the heart of the city. Other cities in the countries also followed the movement such as Busan and their own projects to change the city.

The inauguration of Seoullo 7017 received wide coverage in the international media. Indeed, this project is part of a global trend of requalification of public spaces already well known in Western countries but relatively recent in Asia. The park was inspired by projects such as the famous High Line in New York, the Promenade plantée in Paris, the Rambla Sants gardens in Barcelona, ​​the Beltline in Atlanta and many others.

Seoul is a city in the midst of transformation. Developed on a model favoring rapid industrialization and car-focused, it is now showing through major urban renewal projects its desire to be a more pleasant and a greener city.

SEOUL FOREST, one of our favorite park in Seoul: here

INSADONG: one of our favorite area in Seoul: here