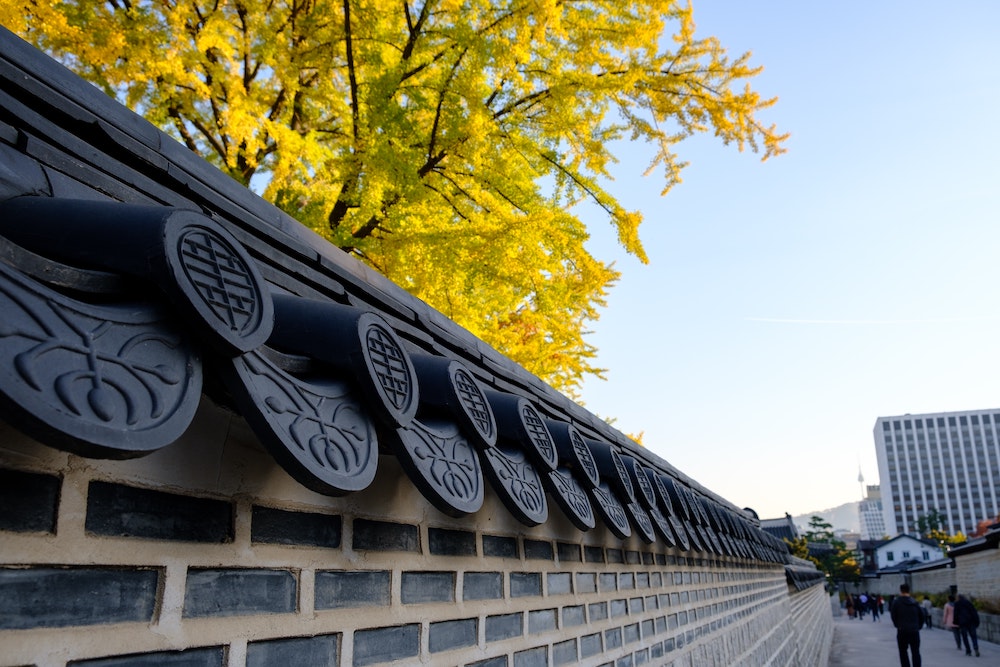 In this post we will help you preparing your trip to South Korea, and describe the best time to visit this amazing country.

Getting exciting about traveling to South Korea? Oh yes, you absolutely should be. However, be aware of the 4 very different seasons, which can make your trip the most amazing one, or the worst one depending on which month you are going to South Korea.

During your trip to South Korea here is a glimpse of what you can expect: you will find yourself in the middle of incredible landscapes, you will contemplate the most beautiful Buddhist temples, designed to blend in with the surrounding nature. Between sea and mountains, gray rock and green trees, the diversity of Korean nature is unspeakably beautiful. As for Seoul, there are many activities there: Insadong or Hongdae districts. The natural treasure of Bukhansan Mountain, and many other fun things to do in this amazing city.

The climate in South Korea is divided into four very distinct seasons. Winters from late November to early March are Siberian cold, fairly dry, especially in the northern area. The summer, on the other hand, is rather hot and humid and is accompanied by a few sometimes quite dangerous typhoons. Note that during this monsoon period, the rains are generally torrential. Spring and autumn are the most pleasant seasons (cool and sunny).

In general South Korea is rather sunny the whole year except for the months of Summer. Clear blue sky is the norm.

However, because of the extreme change in temperature, it is therefore very important to choose the right time for your trip to South Korea. This will influence drastically what you should pack in your suitcase!

Spring and Autumn, the best seasons…

For us no doubt, Spring from April to May and Autumn from September to October, are by far the best time to visit South Korea.

Before moving to South Korea, we spent many years in Hong Kong and Singapore where seasons are practically non-existent. During our first year in Korea, we were so amazed by all 4 seasons which were very distinct and all so beautiful in their own way. However, if you come to visit short term and want to maximize what you can see, Spring and Autumn should be your targeted months.

Here we made a list month by month about the weather and the best time to visit South Korea.

The climatic conditions in the north of South Korea are quite difficult to bear with morning temperatures sometimes reaching -20 °C! Fortunately, the weather is generally quite clear and sunny and there is rarely any rains.

However, January is not the ideal month to travel to South Korea. If you still decide to go there during winter, head to the Sunrise Festival in Sokcho and Gangneung: many Koreans gather there on January 1st to see the first sunrise of the year on the beach.

However, Winter is the best seasons to ski and snowboards in South Korea. You can check out the best ski resorts in South Korea, here. We practically spent most of our weekends in winter in Phoenix Park Resort in Pyeongchang, our favorite spot. Check out our video here if you want to get an impression of what snowboarding looks like in Korea.

Overall, January is definitely not the best time to visit South Korea unless you want to see a bit of snow and feel some real cold weather.

The north is a little less icy and the snow is starting to retreat. Temperatures can reach 4° C during the peak of the day. The center of the country in Gangwon and Pyeongchang area still remain cold. It is still possible to go skiing in February. The southern tip of South Korea is much warmer with a mild temperatures, sometimes reaching 9 to 10° C.

Once again, Sokcho is the scene of festivities as the festival of water and fire is celebrated by its lake: shows and games on the theme of these two elements are organized there. You can also fish on frozen lakes.

In February, the whole country celebrates “Seollal”, the Korean New Year. Just like the “Chuseok” holidays, the big cities are emptying and some businesses are temporarily closing their doors. Hence, we would not recommend February as best time to visit South Korea.

In March, South Korea is getting warmer

March is the last month of winter and temperature are usually raising above 10 ° C depending on the region. It is not uncommon to still see a sudden cold wave from time to time. March is your last chance to hit the slopes with your ski.

The good part about March, is that towards the end of the month, flowers are starting to come out. If you are lucky you can already see a few cherry blossoms. South Koreans start to go hiking again in March to enjoy the warmer days. .

In April, check out the cherry blossoms

In April, expect a real change of scenery: the landscapes are adorned with greenery because of the rice season. Besides, the temperatures are now really comfortable with an average of 15 ° C.

If you go to the seaside at this time of year, head rather to the north, which is less rainy. Head to Gangneung the pine city and enjoy the first days at the beach soaking up some sun and vitamin D. This place is perfect for romantic strolls by the water and eating its delicious fresh seafood.

The cherry blossoms is in full bloom in April. Take the time to walk in the parks, temples and palaces where you can really admire all those amazing colors.

Spring is one of the most recommended season for a successful trip in South Korea. Between April and May, temperatures are ideal, the air is cool, although you can expect a few rainy days.

Hence do not hesitate any longer, April is one of the best time to visit South Korea.

May, one of the best month to visit South Korea

May is another beautiful month in South Korea Temperatures are rising and days are getting longer. Spring is definitely here!

Many celebrations take place during this auspicious period, including the Lantern Festival celebrating Buddha’s birthday. A must-see if you are in Korea as all Buddhist temples are decorating the streets with colorful lanterns.

It is a good time to explore the southern area of South Korea. We recommend Boseong Green Tea Plantation, the island of Namhae a natural beauty or Geoje for sea lovers.

May is another fantastic time to visit South Korea

June, the beginning of Summer

June marks the beginning of summer with rising heat and humidity. In the north, the heat is in full swing with 29 ° C during the hottest days and it is barely a few degrees cooler in the rest of the country.

The Korean summer can be particularly difficult to endure because of its high temperatures and its high humidity. Be careful, from June to August, it is the monsoon season. Heavy rainfall can affect the country, sometimes turning into typhoons. If you travel during this period, do not hesitate to take advantage of the beaches (you can check out Muuido near Seoul, or travel to Jeju). We also listed the best 25 beaches in South Korea here.

July is without a doubt the hottest month of the year which easily reaches 30 ° C or more. Also it is usually the peak of the rainy season. The northern region is the most affected, although the whole country is not left out. Avoid the country at this time, you probably won’t enjoy South Korea as much as other months.

If the month of August the rain starts to drop however, there is a higher chance for typhoons. August is still the second wettest month of the year and similarly as hot and sticky as July. Usually it is recommended to avoid the southern area and Jeju Island. It is therefore recommended that you wait for the autumn season, which is fresher and brighter.

If you are visiting Korea during summer, check out these 27 awesome activities to cope with the heat.

Ahhhh September. The end of the monsoon season. The temperature starts to drop to more comfortable level. With an average of 24 °C, you can take advantage of the mild climate. It is time to head to South Korea and for a perfect trip to Jeju Island.

However be aware of the Chuseok Holiday, the biggest holiday in South Korea. Usually it falls somewhere between late September and early October. You’ll want to avoid traveling in Korea during Chuseok as most people will travel to see their families. Expect traffic on the road, trains fully booked, and some shops to be closed.

Apart from Chuseok, September is absolutely one of the best time to visit South Korea

October, the most colorful month

With October comes the arrival of autumn, which is considered the best season in South Korea.

Autumn is Koreans’ favorite and most enjoyable season to experience the Land of the Morning Calm. The temperatures are mild between 10 ° to 20 ° C, the sky is clear and we can still see people in shorts and t-shirts, a period particularly favorable to walks along the Han River and to visit temples.

The maple trees are adorned with a pretty red dress and the forests take on different shades of yellow-orange. The streets are then peppered with golden leaves nicknamed gingkos. The icing on the cake is that the country receives very little to no rain. Nature lovers will head to Seoraksan National Park famous for its snow-capped mountains (full guide for visiting Seoraksan National Park). With its pine forests and immense granite valleys drawing the landscape in a thousand colors, it is one of the most beautiful natural sites in the country.

In October, we enjoyed traveling to Nami Island, this is where the above picture was taken. To know more about Nami, check out our post here.

So don’t hesitate to plan your trip to South Korea in October. It is the perfect month!

November, it’s starting to get chill

In November, the temperatures slowly slide into winter. There is 10 ° C on average in the country with the exception of the southern part (extreme south and coasts), which is still fairly mild with 14 to 15 ° C on average. Take the opportunity to visit Busan full of local markets, bars and restaurants. The northern coastal part, on the other hand, is much cooler, around 7 ° C.

December is cold and you may expect the first big snow in the country. While the temperature still stays mostly above zero in Seoul, the ski resorts are starting to open. The south of the country is still fairly preserved with around 8 ° C.

To sum up, we recommend that you discover South Korea in autumn (particularly in October) or in spring (ideally in April or May) in order to benefit from the best weather conditions and to make the most of all the outdoor activities that you can enjoy. this beautiful country has so much to offer!

If you are planning your trip about South Korea check out our full guide here, and if you want to check all our posts about Korea, you can do that here.